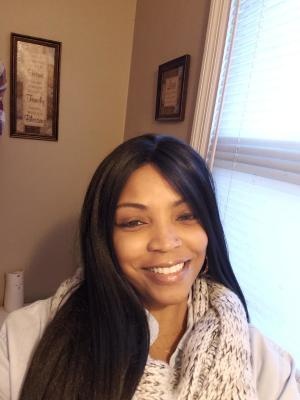 Erika Fa’tean Coward was born December 27, 1979. She was a gift to parents, Billy C. Coward and Jennifer C. Ashford. Due to health complications, Erika’s soul departed this Earth, April 15, 2019, from University of North Carolina Medical Center, Chapel Hill, North Carolina.Erika was bright, kind, and soft-spoken. She was an avid book lover; at a very young age Erika was reading he Encyclopedia. Erika never went to kindergarten.She attended grades one thru fourth in Darmstadt, Germany. Her teacher Mrs.Samuelson had Erika tested and advanced her to first grade due to her excelled reading levels. As an adolescent, Erika was immersed in the Christian Faith. It was her belief in GOD which sustained throughout her life. While at Ft. Drum, New York, Erika taught youth bible study, children’s church, and sang on the Youth choir. Erika would state to her Cousins or Friends, “You’ll know the rules bring your Sunday best because, we go church in Jen-Locs house.”Due to the family’s military status; Erika attended several high schools Kissingen,GE, Salisbury, NC, and Pittsburgh, Pennsylvania. She later attended Pittsburgh Job Corps (1997) graduating with certifications as a Certified Nurse’s Aide and Administrative Assistant. It was at Job Corps Erika would meet and later wed (2000) husband Stevan J.Smith. The union was blessed with two children; daughter Alana Ja’nae (18) and son Allan Joshua (13). Erika’s greatest joy has always been the children. She always desired the best for her children. In late 2000, Stevan joined the military and the family would move to Ft. Hood,Texas. During their families stay at Hood they joined True-Life House of Prayer under the leadership of Pastor Jimmy and First Lady Missionary Virginia Smith.Erika began laboring in vineyard teaching children’s church. She soon took on other ministerial duties as Church secretary, assistant Finance secretary, Praise and Worship singer, and additional duties as assigned by the Pastor or First lady. Erika would later be elevated to Missionary. Erika had always been family oriented. She would make the long trips from Texas to Pittsburgh, Florida, and North Carolina to attend family events or just to check on her loved ones. She ensured the children knew their family roots. In 2008, the family was reassigned to Ft. Bragg, North Carolina. Her love of Christ compelled her to teach bible studies in the home. Many souls would return or  come to Jesus Christ.Once Allan became school age, Erika went to work outside the home. She held various position customer service within Fayetteville. In 2016, Erika was hired part time for the Youth Men’s Christ Association (YMCA) Ramsey Street branch, as a part time Guest Services associate. Erika was known at the “Y” for her “head to toe” signature fashion. If she wore a gray shirt, she wore matching tennis shoes.In 2017, the YMCA was promoted her to full-time Guest Membership Director and Assistant Human Resource Manager. In 2018, Erika became the first recipient to be awarded “The Herb Miller Award” by the YMCA. The award exemplifies her quality of work, dedication, and leadership skills. Erika will be known for her selfless efforts and sound advice by her staff and clients. No task was too great or too small for Erika!

To order memorial trees or send flowers to the family in memory of Erika Smith, please visit our flower store.